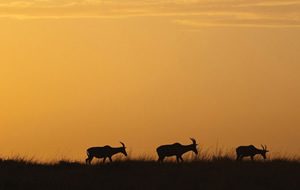 Mara North Conservancy (MNC) is a beautiful private wilderness area of more than 28,377 hectares (~70,121 acres). It is a vital part of the Maasai Mara ecosystem as it forms the north-western zone, bordering the Maasai Mara National Reserve in the south of Kenya.

Mara North Conservancy is a not-for-profit entity established in January 2009. The conservancy is a partnership between 12 Tourism Partner members (6 camps, 3 lodges, and 3 riding outfits) and over 1000 Maasai Landowners. The aim is to create a best-practice, world-class conservancy with long-term commitments to the environment, wildlife, and local communities.

MNC strongly believes in low-bed density tourism and aspires to an ideal minimum ratio of 142 ha per bed (350 acres per bed) so as to guarantee an exclusive safari while minimizing the impact on the environment.

Conservancy fees are collected by member Tourism Partners and forwarded to the conservancy to support the monthly Maasai Landowner’s lease payments and professional land management.

Mara North Conservancy is led by a Board of Directors elected by the Tourism Partners and Landowners, with equal representation from both groups of stakeholders. The Board further works in partnership with the Maasai Landowner’s Committee to meet long and short-term conservation objectives for the future.

”MNC is one of the largest community and private sector owned conservancies in the world, helping to alleviate poverty and ensuring environmental sustainability.”